if you want to support more things like this, join me on my patreon!

Lust Quest is a Lewd Questing and Party Building game where you play a novice adventurer taking odd jobs and getting in over your head.

Right now this version includes the prologue, subtitled "Cannie" for the ally you make on this journey!

Future content will be similar to this and include more of the following:

where can I find cheat codes?

I thought why is the story so similar, it's a same story in 2 game mechanics!

Still cute as hecc tho

It's pretty good!! Really hope you continue working on it :)

Ok this game is cute as hell and the characters seem pretty cool. The writing is alright but the gameplay could use a little fine tuning, not sure how tho.... This is a pretty good start I think tho.... Not sure if this is still getting worked on but it looks good enough that I hope it is :)

What a piece of shit game... It only has one game mechanic and that's clicking the characters, and it's not satisfying. They don't look sexy, they're clothed, there's no nice sound effect when you click them, and they don't even get nude when you beat them. The inventory is fucking broken to the point where I can't pick anything up because it has filled itself up with blank spaces that can't be dropped (WTF?) The end-game boss is easier to beat than the character before it, which isn't very hard either. All you need to do is click on enough characters and whoopdidoo you deal 200dmg per click, which renders the mechanic of clicking the characters in a specific spot useless.

you wrote a paragraph long post on a nsfw game

What are all the cheat codes?

Wait, there are cheat codes? How do i use them

I'm Not Sure Either Tbh.

is there a downloadable version ?

how to take points for sex?

I feel like saying i like how ambiguous all the genders are, its nice as a trans woman being able to just go "yeah all these characters are girls/maybe nonbinary regardless of their "parts"

also very cute and hot art, and all around good game, cant wait for more development! i'll def be supporting on patreon (or at least i will once my job starts :p)

im liking this game so far, its pretty cute, but is there a chance for a flat chested MC?

Do you think there might be a moble port in the future?

Unfortunately a mobile port is not something I'm planning on making in the near future unless my patreon does exceedingly well and that becomes a highly requested feature.  Thank you for asking though!

I love this, so much. Hope see more.

This game needs a volume slider in the options menu. It isn't there for some reason, and I'd really like to be able to mute the music and if you add them,  sound effects. For now I have to mute my entire browser to play this game, which is preeeety bad.

Thank you for the suggestion. I’ll address this the next time I upload a public build.

Will there be a downloadable public version?

If you download the itch.io app and navigate to this page you can download it. I couldn't find how to upload a downloadable version and have it be hosted on the web browser.

Did the game go poof? Page says "The developer has not uploaded a game yet...".

This was due to an error in uploading the new version, I fixed it a little after I noticed the issue. sorry about that!

Yay I love the new Patch!!!

Eeee, I love it! So short but so sweet. Defintely looking forward to more of it in the future!

Fantastic job, really looking forward to the next update, you should be proud. It would be great to see some nsfw stuff in battles.

The next update is including climaxed poses for enemies when they are defeated, hopefully you enjoy! I’m going to be releasing it on Monday of next week.

I Know I cant support with money, but I can support with love!!! Good game so far can't wait for what the future holds!!!

Aww, thank you so much! I'll be releasing an update to this nearing the end of the week with some much requested added features.

Also have you thought of putting the game itself into e621 so you can get more backers on patron?

E621 doesent support html5, so I can’t upload it directly there :( once they allow html5 I would be more than happy to put it up on he site

How do you increase your level / DPC?

You go to a campsite or rest point and click on the "level up" button on the interaction menu. Or you can go to a certain campsite and "level up" with Cannie!

I’m working on art for it, where are you hoping to see the nsfw? In the battles, in little dialogue cutscenes, in a seperate visual novel segment?

I'd love an NSFW gameover / when your HP goes to max 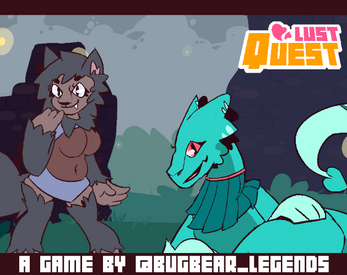